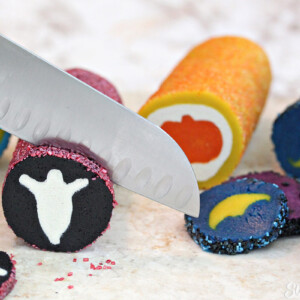 Written by Elizabeth LaBau
These Slice and Bake Halloween Cookies are easy, fun Halloween sugar cookies with surprise designs hidden inside! This recipe provides instructions for making the black cat cookie design, just as an example, but you can use the same basic concept to make an endless variety of designs, just by swapping out the colors and shapes! Please see the note at the bottom for additional instructions for making the bat and pumpkin variations.
Servings: 28 cookies
Prep Time 1 hr
Cook Time 10 mins
Total Time 1 hr 10 mins