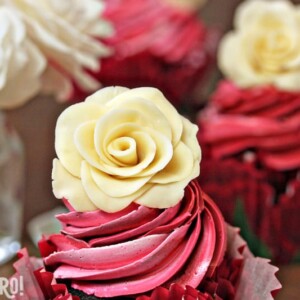 For the Chocolate Rose Cupcakes:

For the Rose Buttercream:

For the White Chocolate Roses: (made 1-2 days in advance)

To Make the Chocolate Rose Cupcakes:

To Make the Rose Buttercream:

To Make the White Chocolate Roses: (1-2 days in advance)

Notes: Rose water can be found in the Middle Eastern aisle of many large supermarkets, and it is also available on Amazon. This cupcake recipe is adapted from Barefoot Contessa at Home by Ina Garten. The white chocolate roses recipe and instructions are from my About.com Candy page.