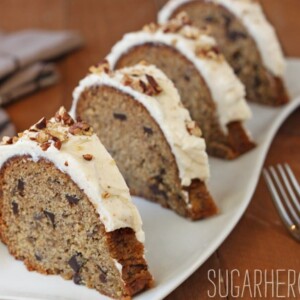 Written by Elizabeth LaBau
This Roasted Banana Bundt Cake is a fun twist on the traditional banana bundt cake! Instead of adding banana puree to a cake batter, the banana pieces are roasted with butter and brown sugar, then the golden bruleed bananas and their syrupy juices are added to the cake.
Servings: 12
Prep Time 45 mins
Cook Time 1 hr 45 mins
Total Time 2 hrs 30 mins

To make the cake:

To make the frosting: