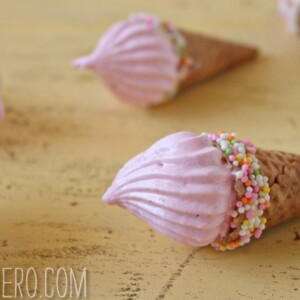 Written by Elizabeth LaBau
These Miniature Marshmallow Ice Cream Cones are as delicious as they are cute! It's made from a delightful buttercream strawberry puree and I think they'd be perfect for any party you go to!
Servings: 24 mini cones
Prep Time 10 mins
Cook Time 25 mins
Total Time 35 mins

I made the marshmallow extra-firm, so it could withstand being piped and left out on a table in the sun for hours. If you don’t like really firm marshmallows, you can decrease the gelatin to 3 envelopes, and try to handle the finished cones a little more gently than I did.