So if you’re anything like me—and I know that you are, that’s why we’re such good friends—you’re basically always craving chocolate, but you’re also always trying to trick other people into thinking you’re healthy.

Meet chocolate soup, your new best friend. It’s basically ultra-rich and creamy hot chocolate, with a few tweaks, served in a bowl with cinnamon croissant croutons and vanilla bean whipped crème fraiche. It’s for serious chocolate lovers only. It’s heaven in a bowl. And it’s the best excuse ever, because if anyone asks, you’re skipping dessert and instead having seconds of “soup.” Because you are just that healthy.

There are a lot of different chocolate soup recipes out there, ranging from recipes that looked like weak hot chocolate (boooo!) to ones that contained 1/3 cup cornstarch or more (ick!). Most recipes seemed to agree that some sort of thickening agent was needed, to make the soup more hearty than regular hot chocolate, and corn starch was most often the thickener of choice.

I have nothing against corn starch, and in fact I used a little bit in this recipe, but only a few spoonfuls. I didn’t want my soup to taste gummy or starchy, two dangers of cornstarch use. So instead, I thickened my soup with a bit of starch and a bit of egg yolks, the common thickener in puddings and custards that makes them so rich. Mixing the two means that I got the best of both worlds (thickness and richness) without tipping too far into excess and winding up with chocolate gloop.

Oh, and the other secret to getting thick chocolate soup? CHOCOLATE. Lots and lots of it—in fact, I used a pound for one recipe, which is 6-8 servings. You can reduce it down to 12 oz if you like, but as long as I’m literally eating FREAKING CHOCOLATE SOUP FROM A BOWL, I’m going to make it as epic as I can.

I was a little bit worried that the chocolate would be just way too intense, so I decided to temper it by adding some orange flavor. I infused the milk for the chocolate soup with the zest of an orange for an hour, to give it a bright, fruity note that worked well with the somewhat bitter chocolate. If you’re not a chocolate-orange person, you can leave it out and have just plain chocolate soup, or add a spoonful of your favorite flavoring extract.

In defense of the chocolate-orange choice, those flavors worked very nicely with the toppings for the soup: cinnamon-sugar croissant “croutons,” and vanilla bean whipped crème fraiche. The croutons couldn’t be easier: toss crouton cubes with butter, sugar, and cinnamon, and bake until golden. The hardest part is not eating them straight from the oven, because they’re going to make your house smell amazing and you’re only human, aren’t you? There’s no shame in going back and making a second batch because you nibbled too many from the first batch. So I’ve been told. By friends. Ahem.

The vanilla bean whipped crème fraiche is another super-easy kitchen hack—just combine cream and crème fraiche, add some vanilla bean paste, and whip until it’s pillowy and light, like shaving cream. The crème fraiche gives it a lovely, slightly tangy flavor, and makes it more robust and less likely to turn into grainy soup at the slightest whiff of overbeating.

It should come as no surprise that this is a really intensely, richly chocolatey dessert, best served in small bowls about half the size of the ones picture here. (Do as I say, not as I do!) It’s a fabulous, unexpected dessert, perfect for the chilly winter months the rest of you are enjoying. And if you make it, don’t hesitate to brag to your early-morning yoga class that you have so much energy because “I ate nothing but a simple soup last night. Ommmmm.”

For the Chocolate Soup:

For the Croissant Croutons:

For the Whipped Crème Fraiche:

To Make the Chocolate Soup:

To Make the Croissant Croutons:

To Make the Whipped Crème Fraiche:

I like a little flavor in my chocolate soup, so I've written the recipe to give it a chocolate-orange taste. If you don't like this combination, you can omit the orange and either have a pure chocolate flavor, or add a teaspoon of your favorite flavoring extract instead.

15.6K shares
Did You Make This Recipe? 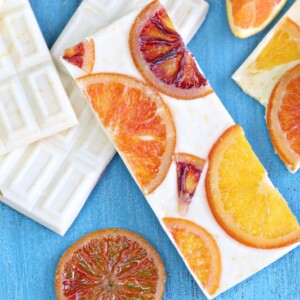 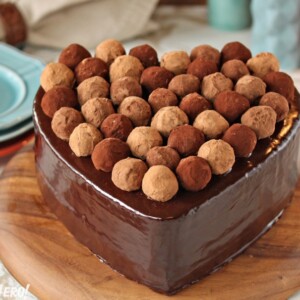