Today I’d like to do something a little different. I want to take off my chef’s apron and put on my tweed professor’s jacket (you know, the one with the corduroy elbow patches) and lecture talk about a subject near and dear to my sugar-lovin’ heart: tempering chocolate. 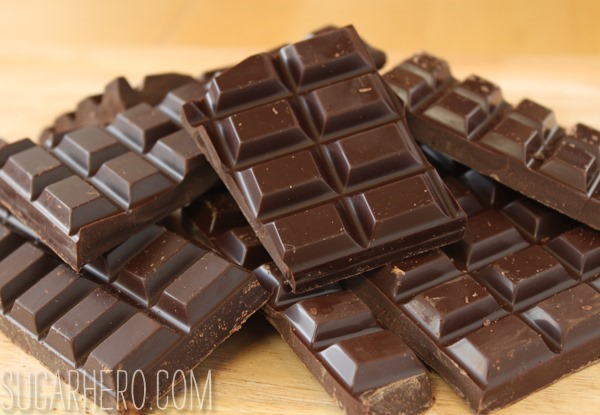 Tempering chocolate is a skill that’s invaluable if you want to do any sort of candy making. Even the simplest chocolate recipes, like chocolate-dipped strawberries, can be improved by using tempered chocolate. And not tempering chocolate can have dire consequences (well, relatively speaking…candy-making is usually pretty low stakes) on the outcome of your candies.

There are a lot of different ways to temper chocolate, but I definitely have a preferred method. It’s easy, it’s relatively fast, and it’s very reliable. I taught myself how to temper chocolate from reading many different sources, and it took me a lot of trial and error to figure out my favorite approach. Some methods were way too complicated and time-consuming, and some never worked for me at all. So, in the interest of sharing the wisdom and sharing the love, may I present The SugarHero Guide to Tempering Chocolate. 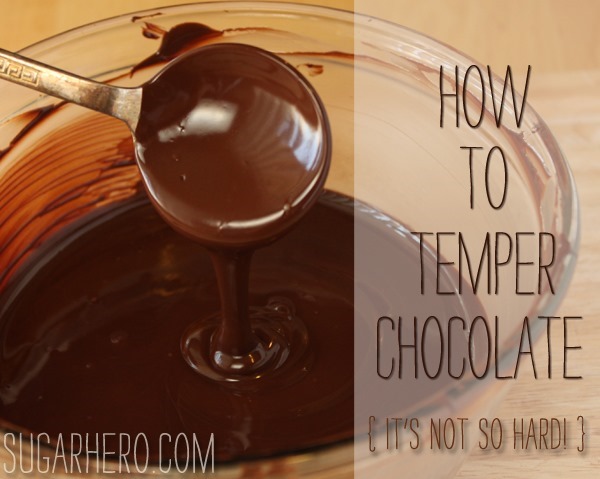 But Why Should I Care About Tempering Chocolate? 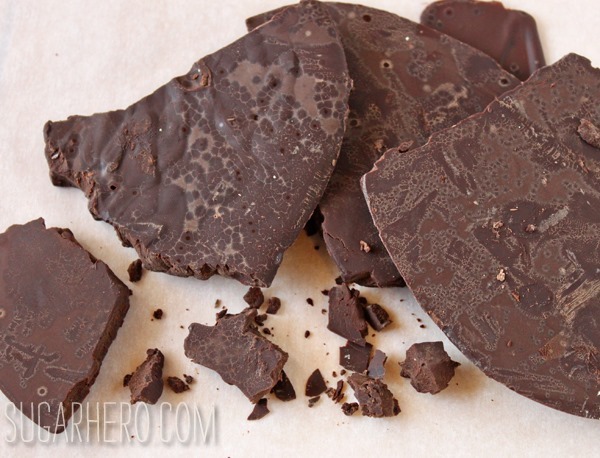 It might not happen every time, but when you don’t temper chocolate, you’re running the risk of having your chocolate candies become soft, easily melted, streaked, or mottled with white and gray patches. 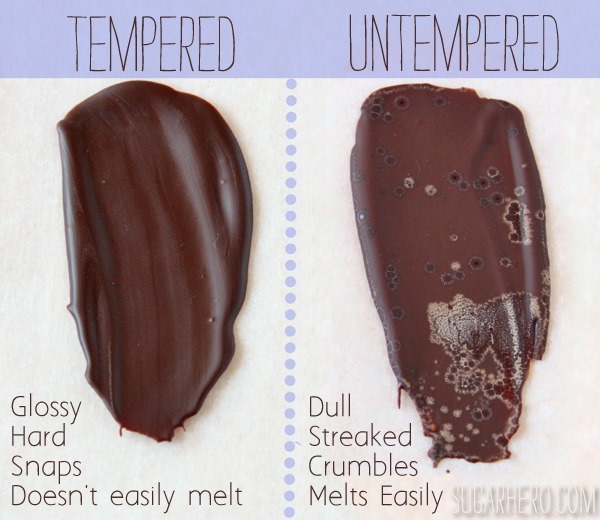 You know how when you unwrap a fresh bar of chocolate, it’s glossy and beautiful? And if you break it in two, it comes apart with a crisp snap? THAT is how tempered chocolate looks and behaves, and that is what I want you to have for your own chocolates!

Okay, I’m Convinced—What Equipment Will I Need to Temper Chocolate?

Tempering chocolate simply means that you heat it and cool it to a precise temperature. It’s not scary and it’s not complicated. Here’s a complete list of everything you’ll need: 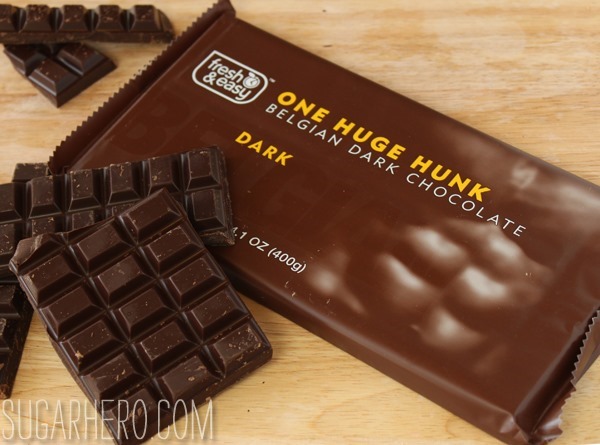 People always ask what kind of chocolate they should use, which is a loaded question. I don’t think there’s a right and a wrong answer…well, Hershey’s chocolate bars are probably the wrong answer. (Chocolate snob, party of one.) But in general, I recommend starting with a semi-sweet or dark bar, not milk or white, and make sure it doesn’t have any extras like nuts, dried fruits, or spices. I don’t like to use chocolate chips, because most brands have a low percentage of cocoa butter and tend to get thick and clumpy when they’re at a workable dipping temperature. Choose something you like the taste of, but also something that’s not crazy expensive, especially when you’re starting out.

I most frequently use these big bars from Fresh & Easy. I don’t know who makes them, but when I started buying them a few years ago they all had the Callebaut logo on them, so at one time, I know Callebaut was their supplier. The logos are now gone so that might have changed, but I find that the chocolate is still decent. It tempers reliably, I like the taste, and between their reasonable prices and frequent coupons, it’s usually the most economical option for the home cook. Trader Joe’s also sells big “Pound Plus” bars that are pretty affordable.

Enough Chit-Chat. How Do I Temper Chocolate? 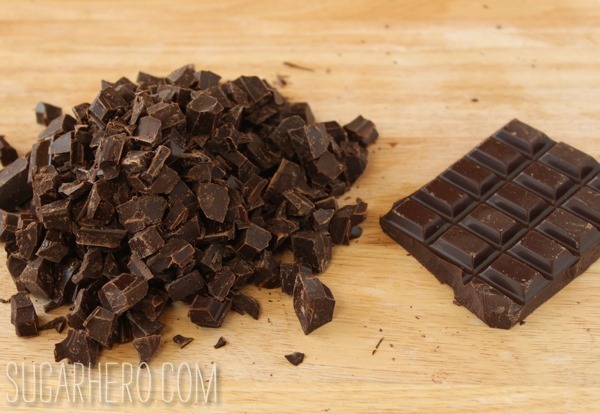 These instructions are for tempering semi-sweet or dark chocolate. If you want to temper milk or white chocolate, see the temperature variations down at the bottom.

Start by dividing your chocolate up. Again, remember that you need to start with tempered chocolate. Any chocolate bar you buy should already be tempered, but variations of heat and storage might bring chocolate out of temper, so just be aware of what you’re using and give it a quick visual check to make sure it’s not bloomed. This method won’t work if you use chocolate that is not tempered. 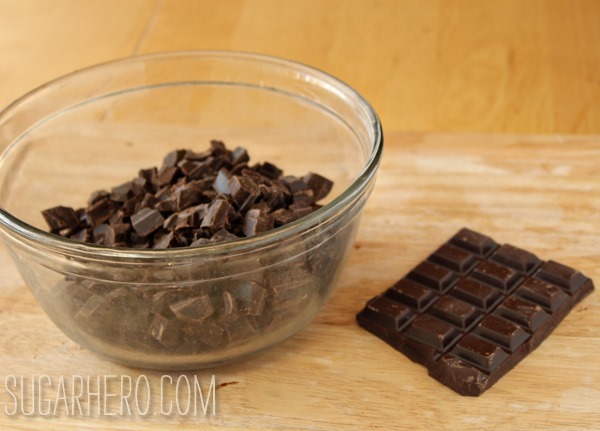 Place the chopped chocolate in a microwave-safe bowl. Again, make sure you keep your big chunk of chocolate separate. 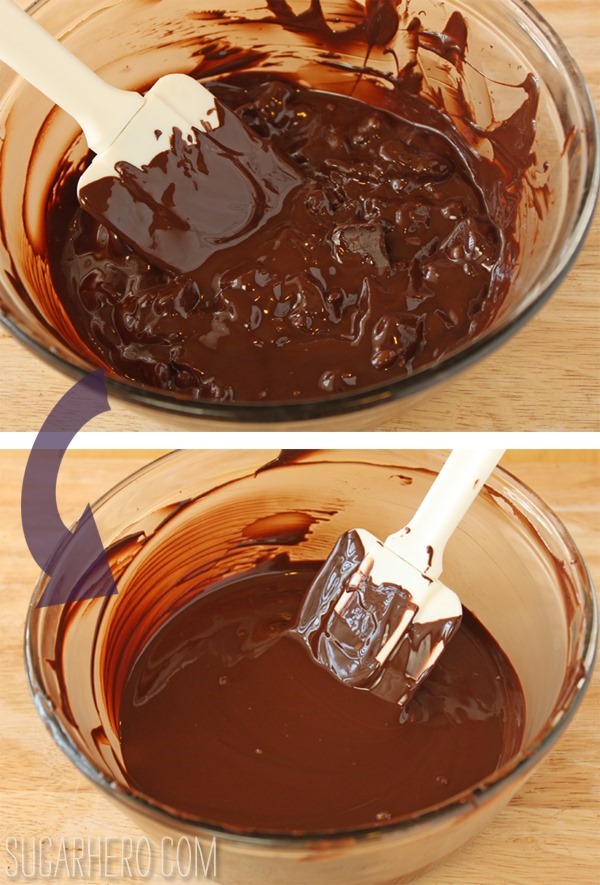 Microwave the chocolate in 30-second intervals, stirring after every 30 seconds, until it’s melted and smooth. 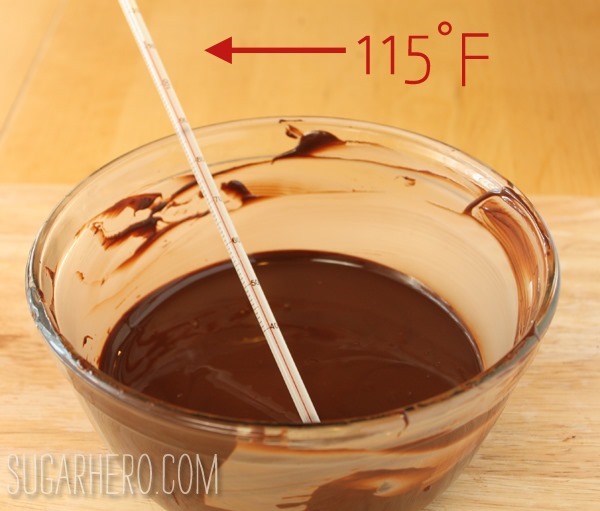 Once everything is melted, insert your chocolate thermometer and make sure that the chocolate reaches 115° Fahrenheit (46° C) on the thermometer. If it’s not close to that, heat it in short bursts until it reaches the right temperature. 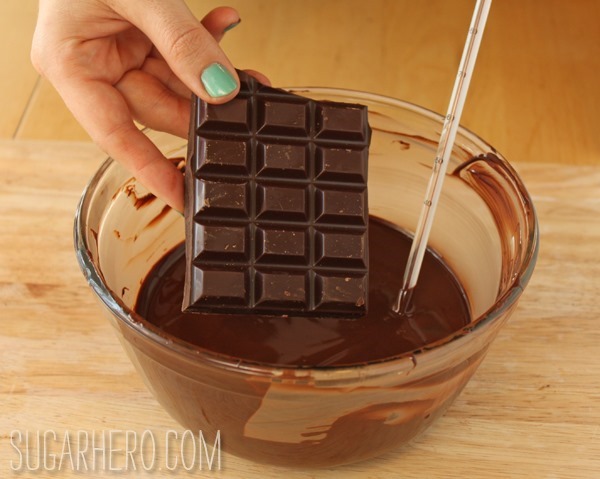 Now it’s time to get tempering! Add your big chunk of tempered chocolate to the bowl of melted chocolate. Aqua nails optional but highly recommended. 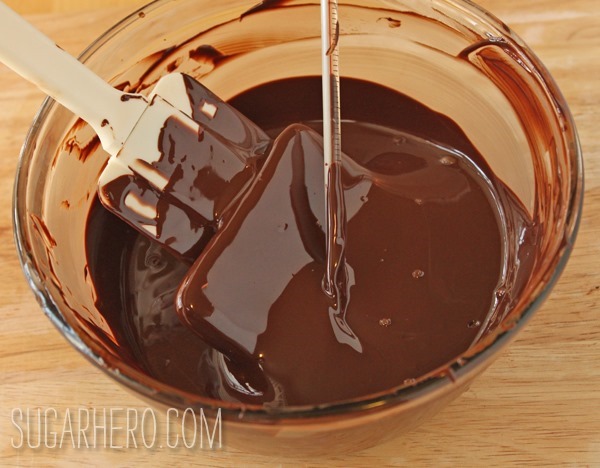 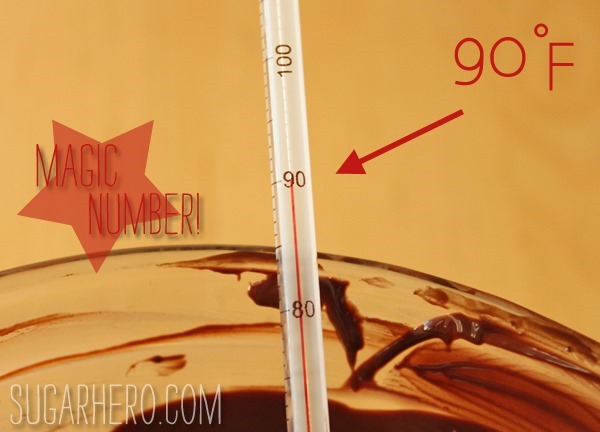 Keep stirring the big chunk of chocolate regularly, and keep an eye on that thermometer. When it reaches 90° F (32° C) it’s time to test out our temper and see if the chocolate is ready! 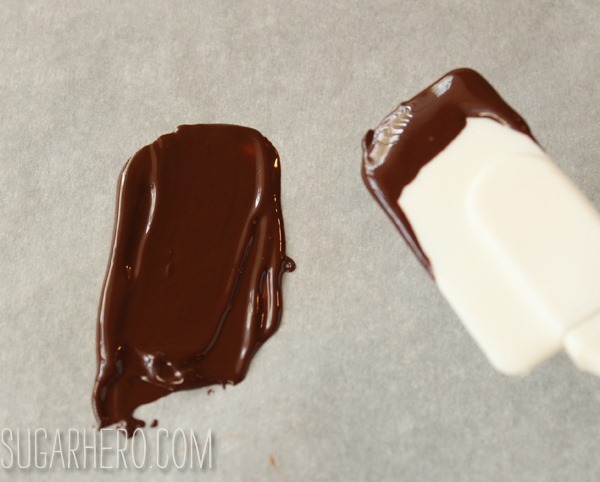 My favorite way to test chocolate is just to smear a bit from the spatula onto a piece of parchment. If it’s tempered, it should start to set within just a few minutes. You will notice that the edges start to look firm first, and it looks a little bit more matte and less shiny. If it’s not tempered, it will stay wet-looking for a long time. If it’s not tempered at first, no worries! Just keep stirring and let the temperature drop another degree or two, and then try the test again. Depending on the chocolate you use and the temperature of your kitchen, it may not temper until it’s 89°, 88°, or even cooler.

Don’t refrigerate the chocolate to speed up the setting process—this will screw up your results and won’t tell you if it’s tempered or not. Properly tempered chocolate will set quickly at room temperature (within approximately 4-6 minutes, depending on environmental factors). 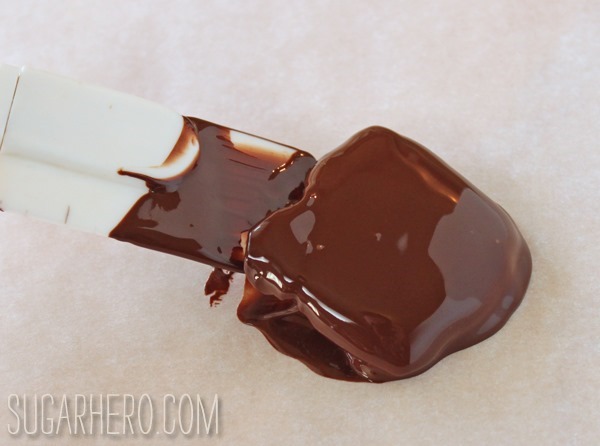 Once your test shows that the chocolate is tempered, remove any remaining pieces of the unmelted chocolate chunk and set them aside. If they stay in the chocolate, they will cool it down too quickly. 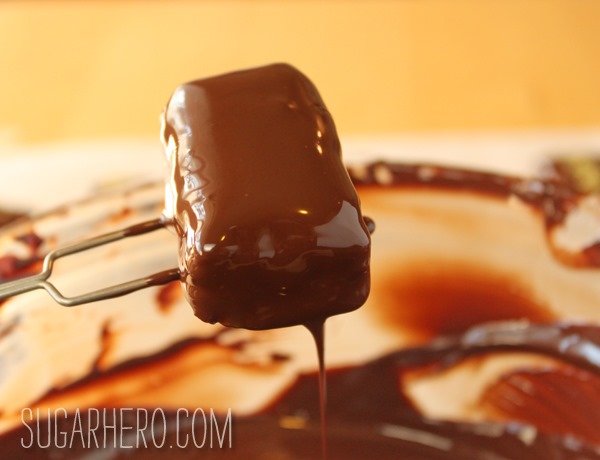 Now you’re ready to get dipping! If the chocolate starts to get too thick and hard to work with as you’re dipping, warm it up in the microwave briefly. The trick to warming it up without taking it out of temper is to warm it up in tiny intervals. So microwave it for 5 seconds, and stir. If it’s not quite warm enough, try another 4-5 seconds and stir again. Warm it just enough so that you can work with it—you don’t want it to exceed 90° F. If you do accidentally take it out of temper, you’ll need to repeat the process—warming to 115°F, adding a chunk of tempered chocolate, then cooling to 90°F—all over again. But as long as you’re smart and cautious about re-warming, you should be fine!

I hope this helps demystify chocolate tempering! I’ll be back on Monday with an awesome recipe that will give us all a chance to put our chocolate tempering skills to good use! (Hint: it’s pictured above. Second hint: it’s not actually a candy. Mysterious!)

38.9K shares
Did You Make This Recipe? 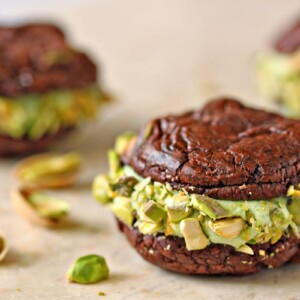 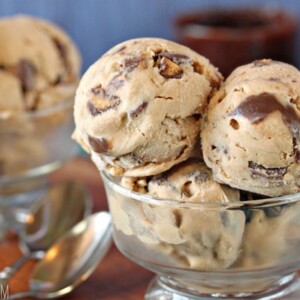 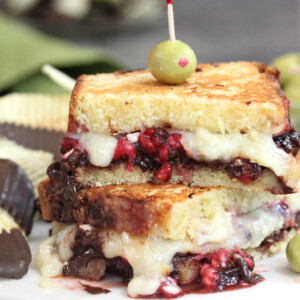 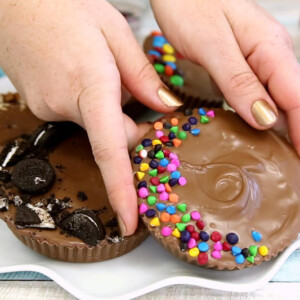