Here’s a tidbit you might not know about SugarHero headquarters: I live in an apartment building with a teensy apartment kitchen. My 1970s-era oven is not-so-affectionately known as The SugarVillain, because its life mission is to burn my baked goods with surprising 50-degree temperature spikes when I least expect it. The flooring is boring linoleum, the cabinets are cheap wood, and the counter space is nonexistent… in short, it is NOT my dream kitchen. 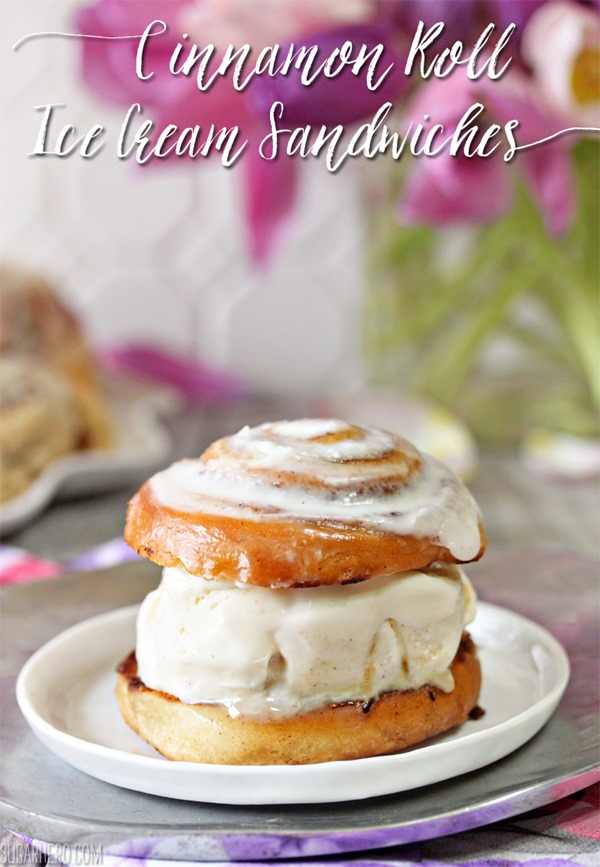 I make it work, and most days I try to focus on the parts of our apartment and city that I love. But it doesn’t stop me from dreaming about what my ideal kitchen would be! Every time I have to toss a batch of cookies into the trash because of an unexpected hot flash in the oven, or every time I have to put frozen goods in an ice chest to make room in the freezer for a big project, I close my eyes, mentally pin a few more images to the Dream House inspiration board in my mind, and whisper, “Someday…” 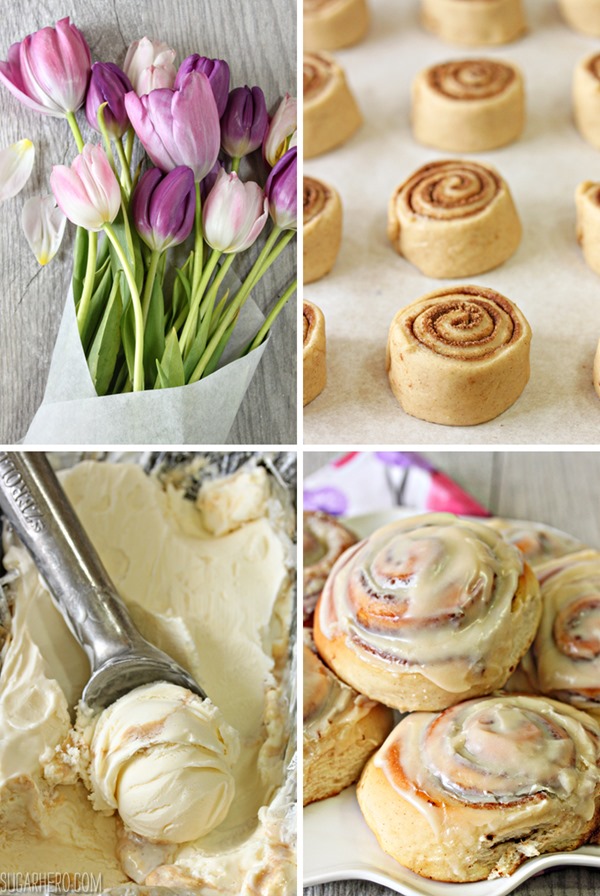 My dream kitchen upgrades were heavy on my mind as I was making these cinnamon roll ice cream sandwiches. I made the cinnamon rolls three different times—the first re-do was to tweak the recipe, but the second was because The SugarVillain struck again and my poor rolls were scorched by sneak-attack 450 F temps. 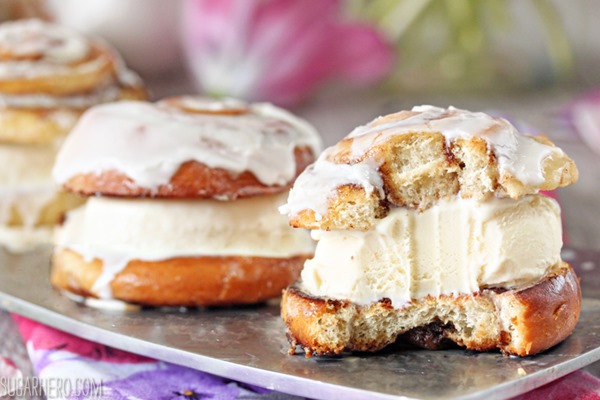 Fortunately, I was a cinnamon roll-makin’ machine by the third batch, and they came together quickly. These rolls are big, fat yeasted rolls, stuffed with swirls of cinnamon, brown sugar, and butter. They’re moist and have that signature gooey center that contrasts perfectly with the crispy edges. They’re almost perfect just as they are… almost. 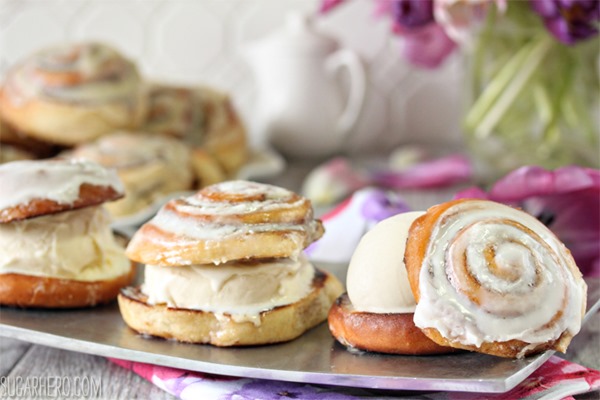 If you’d asked me a few weeks ago, I’d have said that there’s nothing better than a fresh cinnamon roll, but I’ve since discovered that there are four little words that make them waaaaay better:  cream cheese ice cream.

Yep, it turns out that toasting cinnamon roll halves and then sandwiching some cream cheese ice cream between them is the ultimate cinnamon roll experience. The ice cream is rich and creamy, with a wonderful sweet-and-tangy flavor that comes from both cream cheese and crème fraiche. It’s so good, it made me forget all the acrobatics I had to do to cram the ice cream maker into the freezer. 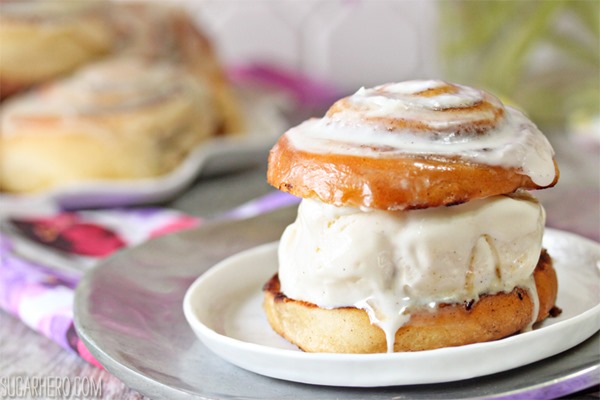 This recipe does take a few hours, so I’ve included some suggestions for substitutions to speed the process up down below. But if you have the time, I really recommend that you make it all from scratch—rolls from a cardboard tube or store-bought ice cream just can’t compare. If you’re tired of the same old ice cream sandwich options this summer, you have to give these Cinnamon Roll Ice Cream Sandwiches a try! 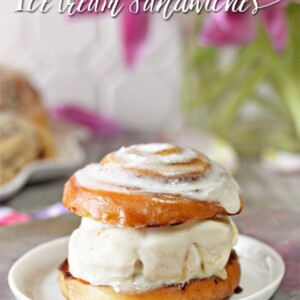 For the Cream Cheese Ice Cream:

For the Cinnamon Roll Dough:

To Fill the Cinnamon Rolls:

To Make the Cinnamon Rolls:

There's no substitute for homemade cinnamon rolls and ice cream, but if you're pressed for time, there are lots of ways you can simplify this recipe. If you don't want to make the cinnamon rolls yourself, you can use ready-to-bake rolls, or buy fully baked cinnamon rolls from a bakery! You could also use store-bought ice cream instead, although you'd lose the cream cheese flavor. I topped mine with a quick icing, so they looked just like cinnamon rolls, but it does make it a little messier to eat, so feel free to skip the icing if you'd like. Cinnamon Roll recipe adapted from King Arthur Flour. 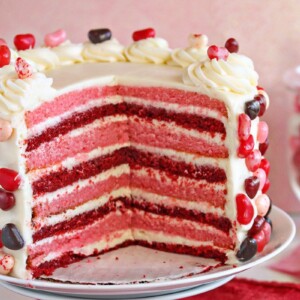 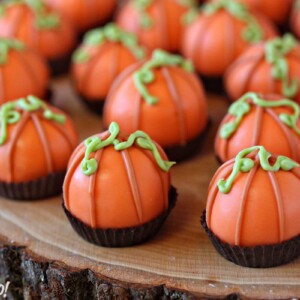 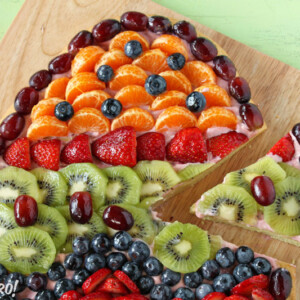 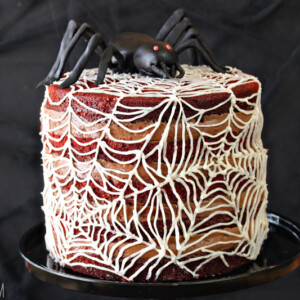