You guys! I’m the mother of a 3-year old now. What the what?! My sweet boy went from a baby to a chubby-cheeked toddler to a long, lean man-child who talks a mile a minute and bounces off the walls and suddenly likes to tie up bad guys and joke about poop (the struggle is real, y’all). It’s been a wild ride and it’s only going to get crazier from here on out.

To celebrate 3 years of Asher, we threw him a Curious George birthday party a few weeks ago!

Asher is all about Curious George right now, which is fine with me. The animated cartoon is delightful and we love reading him the new books. (The older ones are a little creepy—he gets thrown in jail and/or punished by the police all the time. Child-rearing was pretty heavy-handed back then.) In years past we’ve done parties based on children’s books, but this year I wanted to let him choose the theme—so I was thrilled when he told me he wanted a Curious George party, since it fit right into our pattern. I’ll be posting more details about the party later on this week, but today it’s all about that cake. (…bout that cake, no trouble…)

My original plan was to do a roasted banana cake with chocolate-sour cream frosting. I mean, we’re talking about a monkey here—it HAD to be a banana cake, right? But when I ran the idea past Asher, he asked for a chocolate cake instead, so I flipped the plan, and made him a chocolate cake with layers of banana-white chocolate ganache, chocolate mousse filling, and hazelnut frosting. (I wanted to do peanut butter frosting, but allergies were a concern. I do think that this cake would be delicious with a peanut layer, though!) 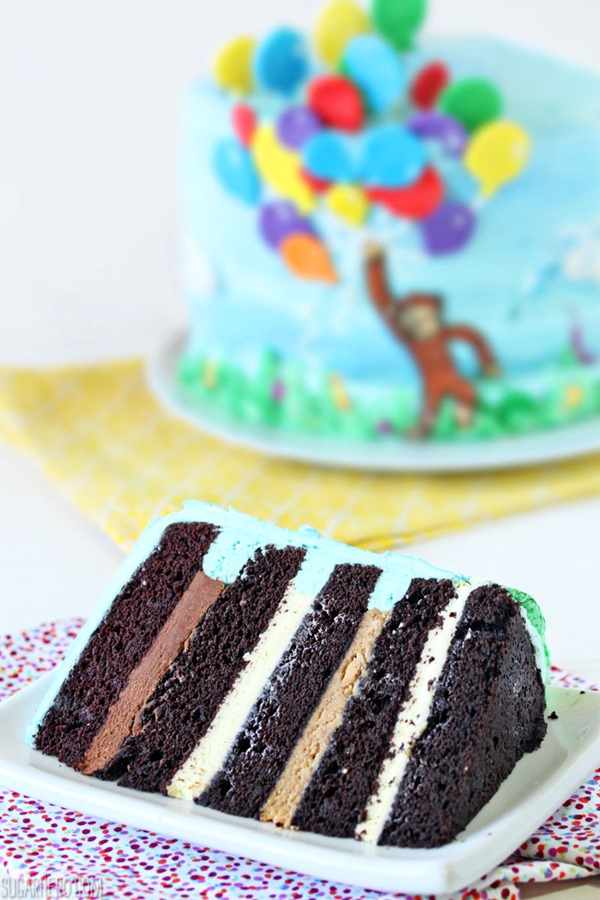 The cake was a hit! The banana ganache layer isn’t overpowering—most people still recognized it as a banana flavor, but it wasn’t strong enough to offend people who don’t like banana, and it didn’t veer into artificial banana-candy territory. The hazelnut layer was so delicious, and the chocolate mousse brought a welcome level of deep, dark chocolate flavor for all the chocoholics we had at the party. 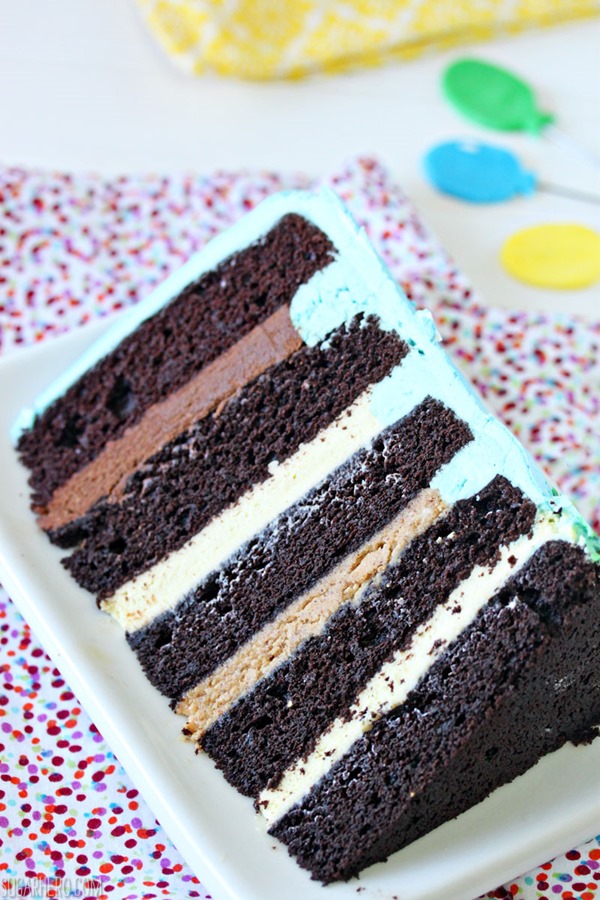 If you’re wondering how I served such a massive cake to children, I did it wedding cake-style. You can google specific directions, but basically I cut a ring in the center of the cake, about 6 inches across, then cut thin spokes out from the ring to the edge. I also cut the pieces in half horizontally so most people ended up with thin rectangular pieces, instead of the monster wedges pictured here. (Do as I say, not as I photograph…) It was a cool morning and so the cake was still slightly chilled, meaning it cut beautifully and held its shape throughout the process. 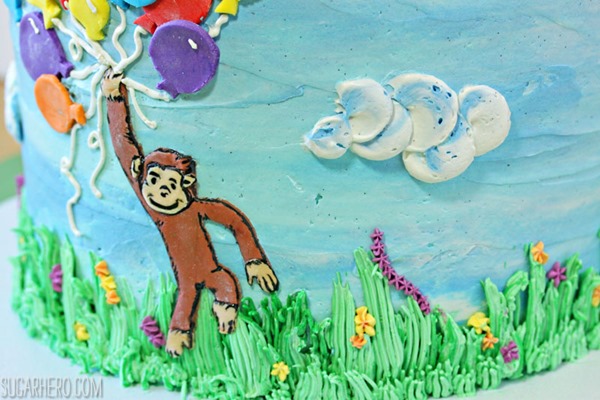 For the decorations, as always, I ended up assembling the cake late at night and sort of winging it. I had an idea of what I wanted it to look like, so I made the fondant balloons a few days in advance (which is necessary, so they have time to harden properly!) but the George character was made on the fly while consulting pictures on the internet. I always leave important stuff to the last minute and kick myself for it, because I do think he really could have benefited from more time and more finessing—my little fondant monkey is more George-adjacent than actually a good likeness. However, I’m trying out a new life motto that is basically “Nobody cares, stop being an obsessive freak” and that is helping me deal with unimportant things like a fondant monkey that’s not quite perfect.

George was given a lovely buttercream landscape to float through that included two-toned grass, lots of purple, yellow, and orange flowers, and big fluffy white-and-blue clouds. 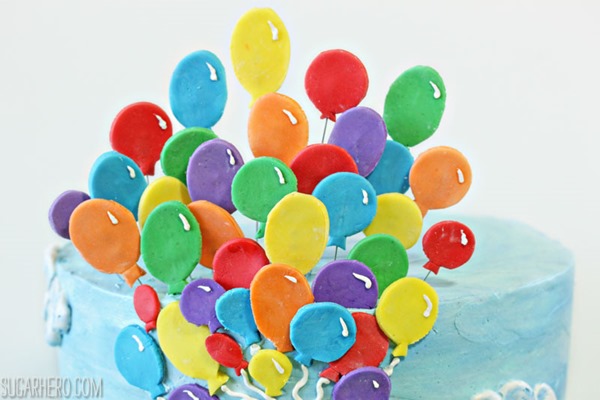 As I mentioned, I made most of the balloons earlier in the week. They’re made out of homemade marshmallow fondant, and it takes about 2-3 days for them to be hard enough to safely stand upright on a cake. I used 20 gauge wire to stick them upright into the cake—it’s called “stem wire” and I found it in the florist section of Michael’s. 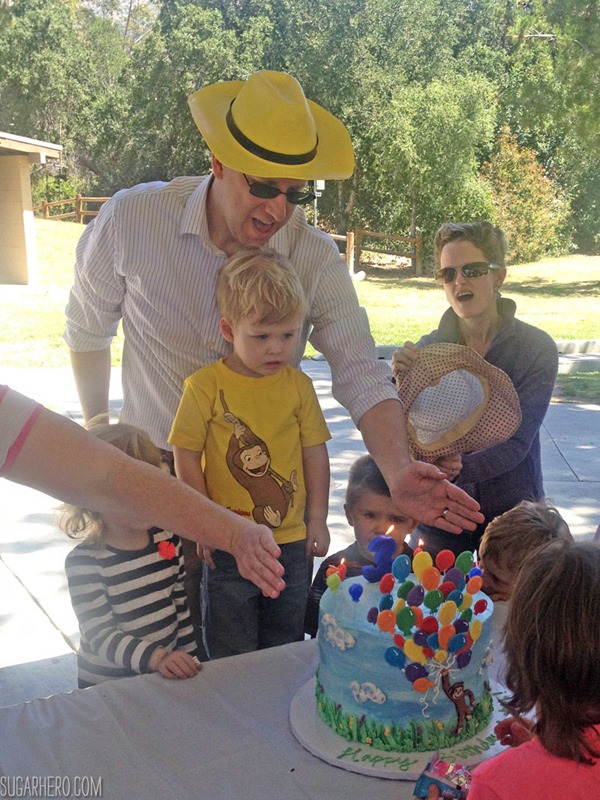 Here’s an action shot of the birthday boy (and the Man in the Yellow Hat!) about to blow out his candles. Game face on! 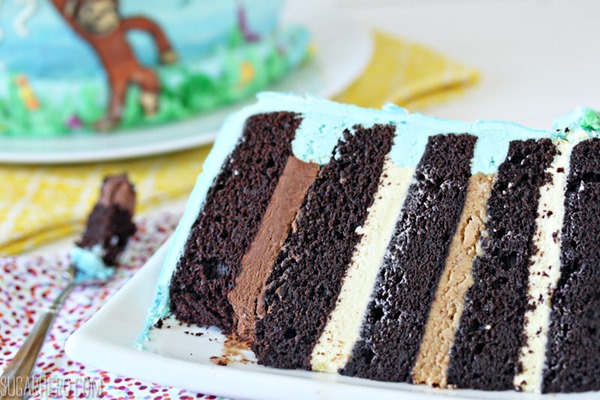 We had over 40 people (about 15 of them children) at the party, so this cake is a little larger than your average tiered birthday cake. It’s 10 inches wide and 5 layers of cake, and it easily fed our group with a bunch left over. I’ve tweaked the recipe a bit down below, to make a slightly more reasonable cake of only 4 layers, but if you’re feeding a smaller crowd you could consider halving it and baking it in 6- or 7-inch pans. 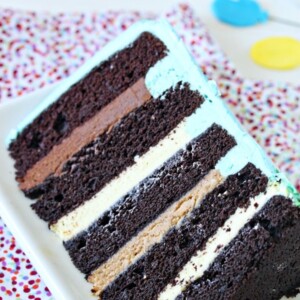 For the Chocolate Cake: - make this recipe TWO times

For the Hazelnut Frosting:

For the Vanilla Buttercream: - make this recipe TWO times if you want plenty of frosting for decorating

For the Banana Ganache:

To Make the Chocolate Cake:

To Make the Hazelnut Frosting:

To Make the Vanilla Buttercream:

To Make the Banana Ganache:

You can also bake the cake in 9–inch cake pans, and increase the baking time a bit. 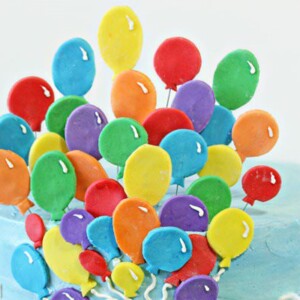 5 from 2 votes
By Elizabeth LaBau
These balloons should be made at least 2-3 days in advance, so the fondant has adequate time to harden. Different types of fondant harden at different rates, so it's a good idea to give yourself as much time as possible and make these well in advance of when you will need they. They last indefinitely if stored between sheets of waxed paper in a low-humidity, temperate environment.
Print Recipe Pin Recipe Rate Recipe
Prevent your screen from going dark
Calories 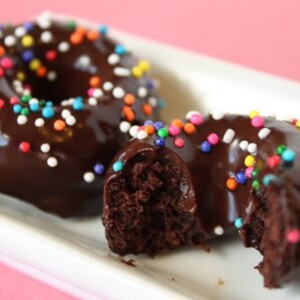