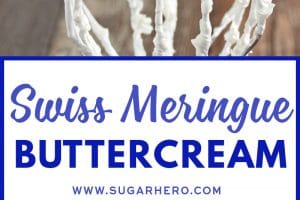 I use Swiss Meringue buttercream in my cake recipes a lot. I used to be an Italian Meringue girl (more on the differences between these below) but in the past few years I’ve migrated almost entirely to Swiss Meringue.

Since I do feature Swiss Meringue recipes so often, I regularly get comments, question, and troubleshooting requests. I don’t think Swiss Meringue is hard, but it’s definitely more labor-intensive (and less familiar) than your typical butter-and-powdered-sugar American Buttercream. So I thought it was time to do a full photo tutorial, showing how to make Swiss Meringue buttercream. If you’re just here for the recipe, there’s a printable recipe card down below, so please scroll down for that. If it’s your first time making Swiss Meringue, or if you’ve had a traumatic Swiss Meringue experience in your past, I hope you find this tutorial helpful. Here we go!

What Is Swiss Meringue Buttercream?

How Do I Make Swiss Meringue Buttercream?

The egg whites should be at room temperature, and the butter should be cool but softened. What I mean by this is that when you press into a stick of butter, your finger should be able to make an indentation, but it should still feel cool-ish to the touch. If it’s very soft, warm, and greasy, it will be harder for your buttercream to come together in the end. For sugar, I always use pure cane sugar in all of my baking and candy making.

Begin by separating the egg yolks from the whites, and place the whites in a clean, dry mixer bowl. Egg whites don’t whip up properly if they come into contact with fat, so it’s important that the bowl be clean from all grease, and that there are no bits of yolks in the whites. You can save those yolks to make custard, ice cream, or French meringue!

Add the granulated sugar to the egg whites in the bowl.

Whisk, baby, whisk! Give the two a good mixing so that there are no dry spots of sugar.

Fill a saucepan with at least an inch of water, and place the pan over medium heat. Bring the water to a simmer, then place the mixing bowl over the pan of simmering water. Ideally, you’ll use a pan/bowl combination where the bowl can tightly fit over the top of the pan, without the bottom of the bowl touching the water in the pan. You can also use a bain marie to heat the egg whites and sugar, then transfer the mixture to your mixing bowl. I just like to use the bowl whenever possible, to prevent dirtying an extra dish.

Whatever setup you use, heat the whites and sugar together over the pan of simmering water, whisking often. Heat and whisk the mixture until the sugar melts, it becomes frothy, and it is hot to the touch. (Not warm! Hot!)

Place the mixing bowl on your stand mixer, and using a whisk attachment, whip it. Whip it goooooood.

You can use a hand mixer to make this buttercream, but you will be at it a long time. Everything takes longer with a hand mixer, and I imagine this could be a 45-60 minute process. Don’t let that stop you, if you want to give it a try–just know what you’re getting in to!

Whip the egg whites at medium-high speed until they become very thicky, shiny, white, and stiff. You also want them to be room temperature. If they’re still hot to the touch–even if they look white and stiff–they will melt the butter when you add it, and that’s no good. So whip until the whites are cool and gorgeously stiff and shiny. Depending on your mixer and the ambient temperature, this could take 10 minutes, or up to 25 minutes.

Once the whites are room temperature and stiff, add the cool-but-soft butter a tablespoon at a time, while the mixer runs on medium speed. It’s important to add it slowly, to give everything time to emulsify properly. Take your time! Once half of the butter is added, stop the mixer, scrape down the bottom and sides, and continue. As you add more butter, the buttercream will start to get thinner and look more liquidy.

Now, this is the part where you’ll start writing me a mean email in your head. Not infrequently, once most or all of the butter is added, you might see this–a hot mess. The buttercream will be thin, watery, and have an unappealing curdled appearance. This is normal! Delete that imaginary email. Just keep whipping. Repeat after me: just. keep. whipping. 9 times out of 10, turning the mixer on to medium-high and letting it go for 3-5 minutes after all of the butter is added will solve your problem. Sometimes it just needs a good whippin’ to emulsify all the fats and give you a luscious buttercream.

If you’ve whipped it for 5 minutes with no change in appearance, there’s a chance the whites were too warm when you added the butter, or the butter was too warm/greasy. In that case, refrigerate the bowl of frosting for about 10 minutes. You don’t want it to be cold–just chill it a bit, then try whipping again. Unless there’s been a massive measuring or procedural mistake, this will solve your buttercream problems.

And THIS is what you’ll end up with! A gorgeously fluffy buttercream that is stable enough for big layer cakes, but tastes light and fresh.

I like to add flavorings after the buttercream is made. With things like salt and vanilla, that’s less important, but for other, stronger flavors, it can be hard to gauge how much to add before the buttercream is whipped into its final state. So once it’s finished, turn the mixer to medium, add your flavorings, give it a taste, and adjust as needed. Flavoring extracts and emulsions are the most common way to flavor Swiss Meringue buttercream, but I’ve included a few other ideas down below.

Your Swiss Meringue Buttercream is now ready to be used! If you’re not going to use it right away, you can store it in the refrigerator or freezer, in an airtight plastic container or in zip-top gallon plastic bags. If it is refrigerated or frozen, let it sit at room temperature until completely thawed, then re-whip with the whisk attachment until it is once again smooth. This buttercream does become spongy as it sits, so even if you wait a few hours between making it and decorating your cakes, you’ll probably want to give it a quick whip for the optimal texture. If you find that you are getting a lot of air bubbles in your frosting, try running the mixer on low speed for awhile, to make it silky smooth. 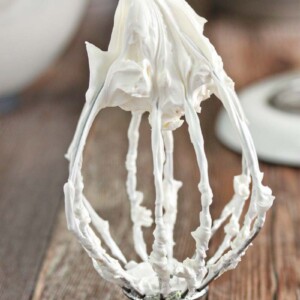 4.78 from 74 votes
By Elizabeth LaBau
Swiss Meringue Buttercream is delicious, versatile, and the BEST frosting to use for layer cakes. Learn how to make it with this Swiss Meringue Buttercream recipe and photo tutorial!This recipe yields 2 lbs 6 oz frosting, or about 10 cups. I find it’s usually enough to frost a 9-inch 3-layer cake, but your mileage may vary depending on how much frosting you use between the layers and what kind of decorating you want to do.
Print Recipe Pin Recipe Rate Recipe
Prep Time 30 mins
Cook Time 10 mins
Total Time 40 mins
Prevent your screen from going dark
Yield 10 cups frosting
Calories 200 kcal

The easiest way to flavor buttercream is to add a flavoring extract. Depending on the strength, you can add anywhere from 1 tsp – 1 tbsp to the buttercream. Start conservatively–you can always add more to taste, but you can’t take it back if it’s too strong! You can also add flavoring oils, but remember those are much more concentrated, so use them sparingly. Vanilla, almond, coconut, lemon, orange, and peppermint are all wonderful additions to buttercream.

Chocolate buttercream: melt 8 oz of dark chocolate  in the microwave. (I like to use a really bittersweet variety, but semi-sweet will work too). Let the melted chocolate cool to room temperature, then add it to the finished buttercream. Mix on low speed until incorporated, and scrape down the sides well.

Nutty buttercream or praline buttercream: Add 1/2 cup of ground nuts (pistachios or hazelnuts work very well) or praline paste to the finished buttercream. The oils in the paste will soften the buttercream, so this works best as a cake filling.

Coffee buttercream: Coffee extract works well, but if you don’t have that, you can use instant espresso powder, mixed with just a bit of water, to make a very strong coffee paste, and add that to the buttercream.

I’d love to hear your feedback if you give it a try! Have questions? Suggestions for other pastry photo tutorials I should do? Leave a comment down below!

If this recipe seems a little too complicated, you’ve got to try this super-easy variation: The Easiest Swiss Meringue Buttercream! 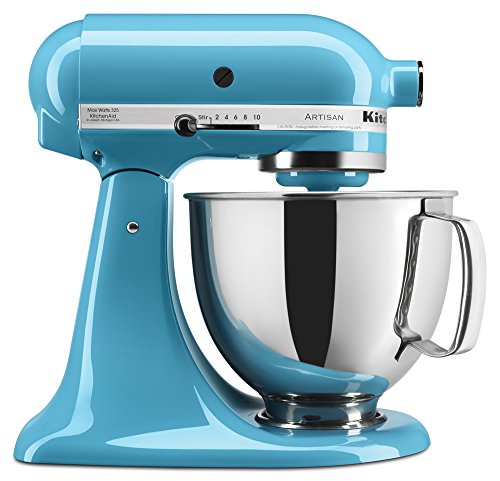 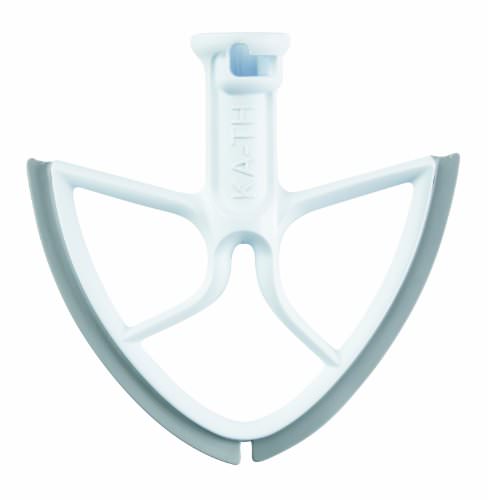 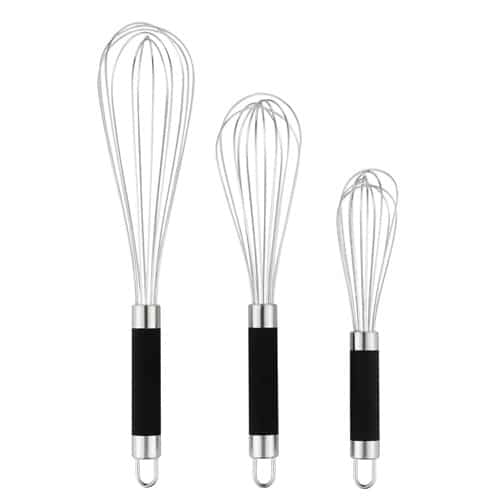 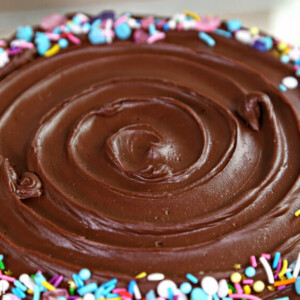 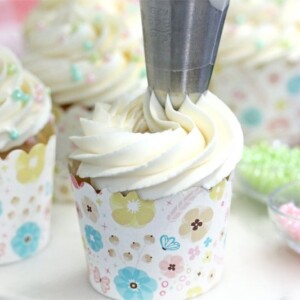 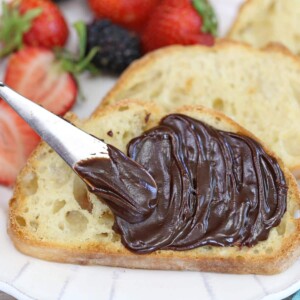 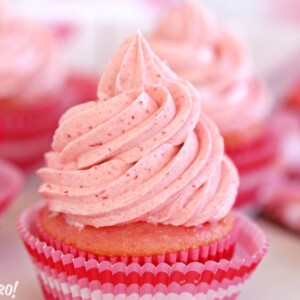