Last year I only posted one measly Fourth of July recipe on SugarHero. Boooo! Why so skimpy on the patriotic desserts, SugarHero? This year I wanted to make up for that omission, so I decided to go big…really really big.

Is there a better way to celebrate our country than with a larger-than-life American flag layer cake? Absolutely not! This monster of a cake has over a dozen red and white layers, a blue corner, and a white star baked right into the cake. It can easily feed 30-40 people (but I’ll show you how to reduce it for smaller groups!) and is an absolute show-stopper. If you want to wow your guests and totally overshadow the fireworks display this Fourth of July, you need to make this cake! 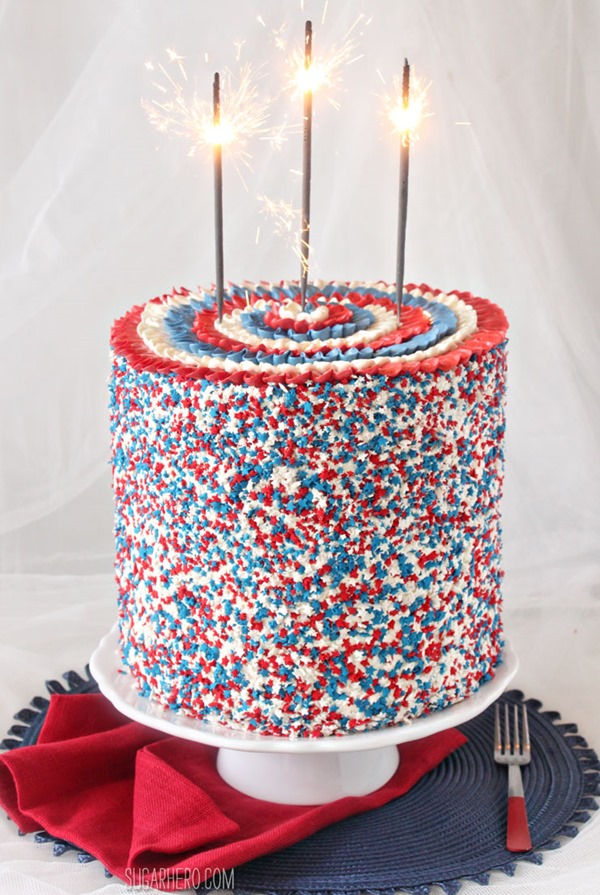 I wanted to make the outside of the cake as beautiful as the inside, but I am also a lazy cake decorator. So for maximum impact with minimal work, I turned to my good friends, the sprinkles family. An assortment of star-shaped sprinkles saved the day and made the cake look colorful and festive, and I didn’t have to do much more than press them along the outside. (I used star sprinkles similar to these—you will probably need close to 12 oz for the full-sized cake.)

What really made the cake pop, of course, were the sparklers on top! After a wild goose chase than involved driving to the nearest town where sparklers are legal (because apparently they can’t be sold in my town…shhhh don’t squeal on me), scouring all the sketchy parking lot fireworks stands, and STILL not finding any sparklers, a friend took pity on me and gifted me some leftovers from her wedding. They are extra-long and burn extra-bright, and they were extra-perfect! Asher and I had fun playing with them, too. Nothing like some mother-son bonding over pyromania.

[A note about the sparklers: they are not intended for food use, and while burning they threw off a little ash on the top of the cake. I scraped that frosting off and re-frosted the top before we served it to people. But if you want a similar effect, look for cake sparklers, which are food-safe!]

This is hardly my first time at the Unnecessarily Tall Cake Rodeo. I think my obsession started when I made this Carrot Cake with Coconut Cream Cheese Buttercream. Sure, tall cakes are awkward to slice, and sure, you’ll be hating life when you’re trying to cram one into your overstuffed refrigerator, but there’s something so striking about an extra-tall cake, I’m willing to forgive all sorts of annoyances. Since then, I’ve made an 8-layer Pink and Red Velvet Cake, and a 9-layer Chocolate Salted Caramel Cake. Those cakes were fun, and definitely tall, but this might just be my masterpiece. My edible Sistine Chapel, if you will.

This cake is made with vanilla buttercream and my favorite yellow cake recipe. I was planning on having thirteen red and white layers (for accuracy in flag depiction, naturally) but I mis-counted and ended up with 15. D’oh! You can either see this as a mistake, or an endorsement of how awesome our country is. New National Motto: So Rad It Needs Another Two Flag Stripes. You’re welcome, America.

Oh, you’re wondering about that star baked into the blue layer? Just a little something I like to call a sugar cookie. (Crazy, right?!) I got the idea from Once Upon A Pedestal, who makes all kinds of amazing hidden design cakes, and who has used cookie dough in the past to get really crisp designs. You definitely can make the stars with white cake instead of cookies (more on substitutions and simplifications below!) but I wanted a sharp, well-defined star shape, and thought cookies were my safest bet. The trick is to use a dough that doesn’t spread, and then to barely bake the cookies—just enough so that you can handle them. 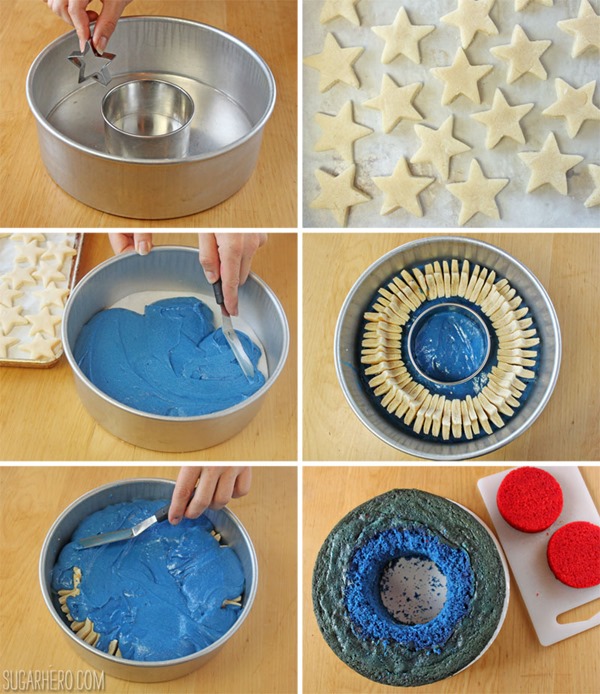 You’ll also want to do some planning and make sure that your star shape can easily fit around the outside of the cake, leaving plenty of room to cut a circle out of the center. I used a large round cutter to help position my star cookies, to make sure I had an even margin from the edge on both sides of the star. The last trick is to partially bake the bottom layer of cake before you place the cookies, so they don’t sink down to the bottom. It’s a lot of steps, and it’s fiddly for sure, but I think it’s worth it when you cut into the cake and hear the oohs and aahs.

So how does it taste? Just as amazing as it looks! I kept it simple and flavored everything with vanilla, but this would also be good with orange, lemon, or almond extracts (just be sure to use something clear, so the white buttercream doesn’t change color). The stars are a little denser than the surrounding cake, so it’s easiest and neatest to cut the slices when the cake is cold. They’re definitely not hard and crispy, though, and they blend nicely with the cake texture. I should add that not every slice had a perfectly shaped star, but even the ones with a more “abstract” star shape looked completely awesome. 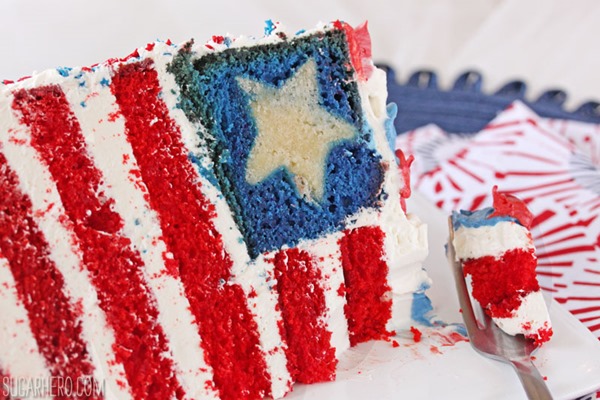 Ready to rumble? Let’s do this thing!

This is a long recipe, and although the individual steps aren’t complicated, please be sure to read the notes and entire recipe through before beginning! While it might be possible to make this in one day, I recommend spreading it over 2 days: make the cookies, cake layers, and  (maybe) the frosting one day, then assemble it the second day.

Serving Size: The full cake, pictured here, will easily serve 30-40 people if you give them small-to-average slices. If you do make the full cake, I recommend slicing it in half before cutting the slices, so you’re serving from two average-height cakes instead of one really tall one. You’ll get the cleanest cuts if you slice the cake while it’s cold. I assume that many folks might not want to make such a giant cake, so the recipe is written to produce half the amount of red cake and frosting. This will get you a cake with 5 red layers instead of 8. If you want the full 8, be sure to follow the instructions and double the portions that say they should be doubled.

Equipment: I have included a list of equipment at the end of the recipe. Some of it is optional (but recommended, to make your life easier!) and some of it is necessary. The absolute musts are gel food coloring (don’t use liquid! You won’t get the bright colors you need!) and tall 9-inch cake pans. I like using 9×3-inch pans, but 9×2-inch pans will work as well. Do not use 9×1.5-inch pans, they might not be tall enough for the cake to bake.

Simplifying: I won’t lie, this is a big project. One way to make it easier is to omit the stars from the blue layer entirely. You’ll still have a striking design, but won’t have to spend time on the cookies. If you want to keep the stars, but don’t want to mess with cookie dough, consider using pound cake instead. Pound cake is denser than most cake, so it should hold the star shape better, and it’s readily available in many grocery freezers. Cut the cake when it’s semi-frozen to get the cleanest slices and shapes. You will probably need at least 3 frozen pound cakes to get enough stars for this cake. While you might be able to use a regular homemade white cake, I haven’t tried it and can’t guarantee that the stars will hold their shape during the cutting or baking process. 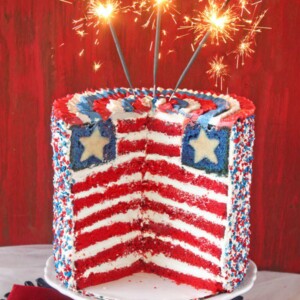 5 from 3 votes
By Elizabeth LaBau
When you want to go big, this American Flag Layer Cake is the cake for you! This ultra tall cake mimics the American Flag on the inside with layers of red and white stripes and even a white star baked right inside. It feeds a big crowd so it's perfect for barbecues or Fourth of July celebrations.
Print Recipe Pin Recipe Rate Recipe
Prep Time 4 hrs
Cook Time 40 mins
Total Time 4 hrs 40 mins
Prevent your screen from going dark
Servings 40
Calories 513 kcal

For the Red Cake Layers:

For the Blue Cake Layer:

To Make the Red Cake Layers:

To Make the Blue Cake Layer:

The cake recipe is adapted from the Golden Yellow Cake in Rose Levy Berenbaum’s The Cake Bible. My inspiration for using sugar cookies in the cake comes from Once Upon A Pedestal.

20.0K shares
Did You Make This Recipe?